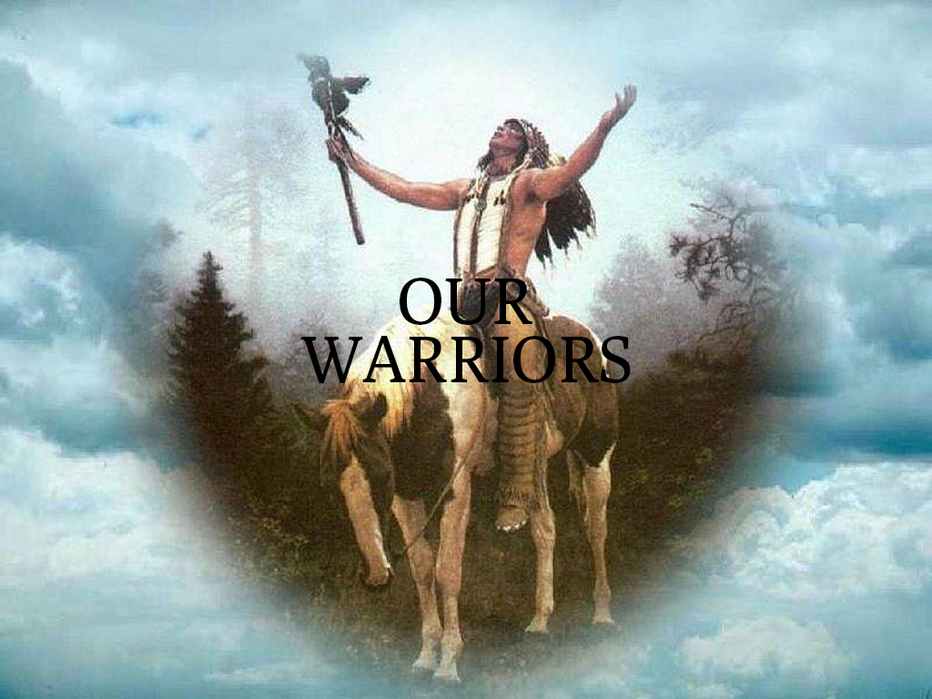 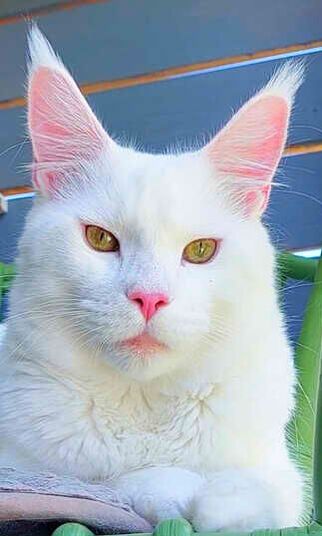 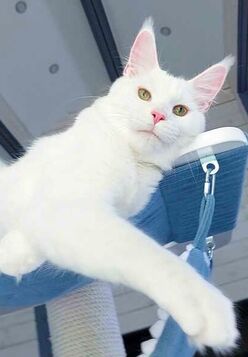 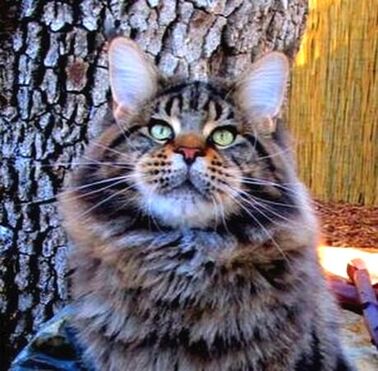 ​   This jewel is only 18 months old, as of this photo op, and is one of our newer additions from an International Show Champion father AND mother from St Petersburg Russia.  He has since been ​re-registered here with CFA and TICA.  He is a classic brown marble tabby with fabulous markings and no white.  He also has lime green eyes which he does pass on to his offspring.  He is not even close to being mature and has already proven himself quite the stud cat by siring 2 of our early summer litters from 2019.  When he gets a little older we will see how he does in the US show ring, but believe he will do quite well.  His father was tops in his class in his country and we feel this handsome guy will do the same.  His father, at 8 years of age, weighed in at 29 pounds and this beauty should top that.  He is massively big boned and already hitting 23 pounds.  And, he is sooooooo gentle and sweet natured and loves nothing more than being close by you at all times or right in your lap.  He does this cute little thing to you in the mornings where he likes to place his paw on your cheek while you are still asleep and gently cooo at you until you wake up.  When he was younger he would get in the middle of your chest and do this, ugh.  As he got bigger and heavier, we broke him of that, thank God.  He is an absolute treasure and joy to be around, and to have around, and ​is the epitome of what a quality Maine Coon should look like.
above 3 pictures and video of Esso taken 10/18/19 at one year of age
=====================================================================
RETIRED/SOLD 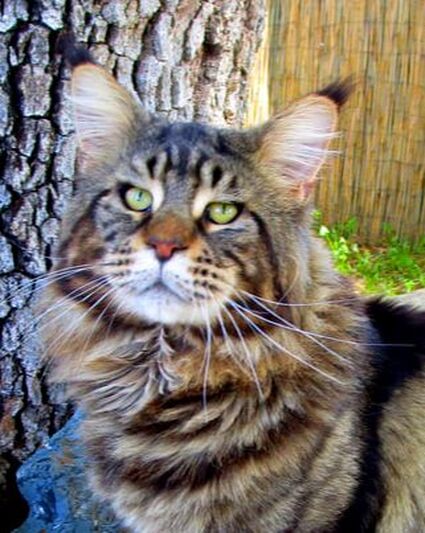 " ENRO "
​
​      This exceedingly handsome guy is twin brother ​to Esso above with the exact same International Champion father AND mother as Esso (same parents, same litter).  He is only 18 months old, as of this photo op, and is a classic brown marble tabby with magnificent marbling and huuuuuge ear tufts and like his brother Esso, has lime green eyes which he does pass on to his offspring.  He should reach 30 pounds by the time he reaches maturity at 6 years just like his almost 30 pound father. Several of our Spring 2020 litters are sired by him, and his brown marbling is very evident in the coats of his babies :)  His temperament is quite different in that his is more needy and little boyish.  He would prefer to be with his mommie (me) then with the other cats.  As he grew he was always the one snuggled in bed with me or up on my pillow.  He is the much more quieter of the two but not at all timid except for really loud noises.  When push comes to shove he is up front ready to do battle like when we had a visit from that neighborhood bear last year.  He was right at his pen door, making the most ungodly noise, ready to wup that bears butt and, that was a 600 pound bear.
above pictures of Enro taken 3/10/20 at 15 months of age
=====================================================================
NOT FOR SALE

​         This marvelous creation is an EM and Tao blue smoke tabby beauty born 3/30/20 to our EM's very last litter.  He has also inherited his grand fathers beautiful golden eyes and eye lashes any woman would absolutely die for, lol.  He is also going to be a biiiiig boy probably topping out at 30 pounds when mature.  We expect great things from him in the show ring in the following months AND feel that he will be producing some beautiful blue smoke and black smoke babies later this year with a few of our select moms.  He is an absolute clown around the house and quite the attention getter with his hilarious antics.  On top of that he is momma's (me) little love bug always wanting to be held and loved on.  He also has the loudest purrrr I have ever heard and snores like a drunken sailor when ​asleep :)  Oh well, nobodies perfect, and there is always ear plugs available when he decides he wants to sleep on my pillow right next to my ear, lol.
above pictures and video of War Chief taken on 10/21/20 at 7 months 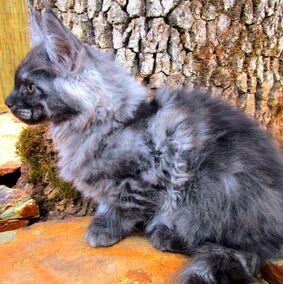 above pictures of War Chief taken at 2 months of age 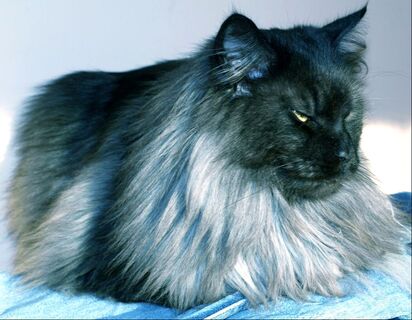 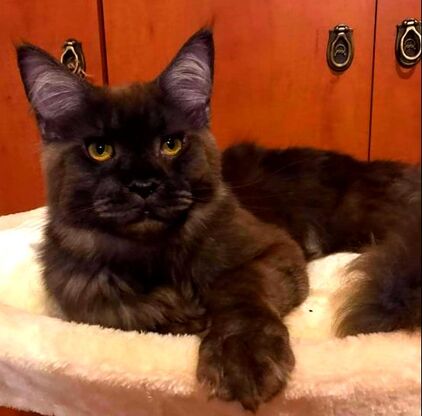 " IRON WARRIOR "
This is our newest acquisition from an International Show Champion mother AND father from St Petersburg Russia.   He will ​be ​re-registered here with CFA and TICA.  He is a black smoke beauty and will be teamed with Mouse and some of our other select ladies this year and should produce some very distinct blue smoke and black smoke offspring.  At his current age of 8 months, as of this date, he has already topped out at 15 pounds and is very big boned so, he's gonna be a bigun :) - lol.  And, he has that typical Maine Coon personality of just downright SWEET SWEET SWEET.
above pictures of Iron Warrior taken 12/10/20 at 7 months of age 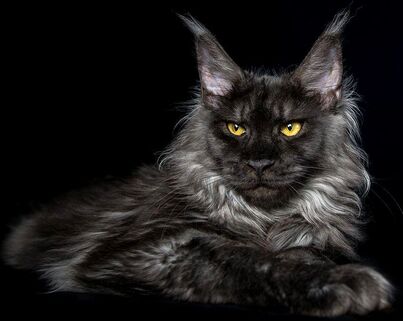 " TAO "
RETIRED/SOLD
Our gorgeous Tao is just 4 years old and has been our primary stud male until the introduction of Esso and Enro above.  Tao was a bit upset with having to share all the girls with Esso and Enro but has since excepted them and they have all become fast friends as long as they're housed in separate pens, lol.  This beautiful creature is from a Show Champion father and mother from the Ukraine but has since been re-registered here with CFA and TICA.  Tao is a biiiiiig boy and massively big boned and will probably top the scale at over 30 pounds when mature.  He is such a loving gentle giant but also fierce when protecting his girls.  We had a visit from a neighborhood bear last Fall (we live on 10 acres out in the country) and he went ape making noises I have never heard him make before until that bear left.
​He is a beautiful classic brown marble tabby with white.